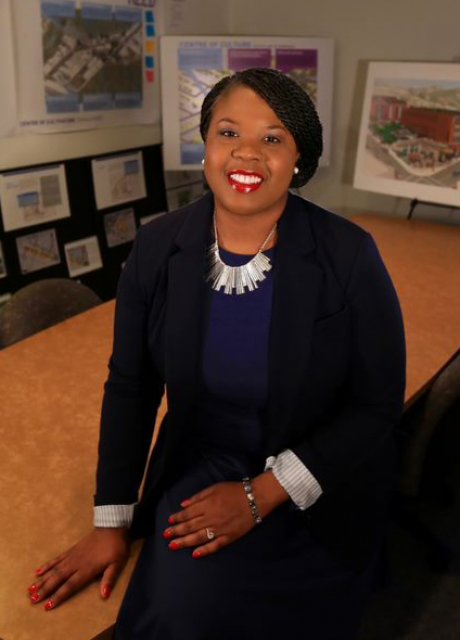 Marimba Milliones is president and CEO of the Hill Community Development Corporation (Hill CDC) in Pittsburgh Pennsylvania's historic Hill District neighborhood. She is a practitioner of and national thought leader in equitable development. Her work is focused on assuring equity in urban-core redevelopment involving low-moderate income residents, communities of color and cities. Milliones advocates for and utilizes intentional planning and development practices that honor people, place, culture and the market. She believes in win-win models. To this end, Milliones led negotiations of a community benefits agreement with the National Hockey League's Pittsburgh Penguins to assure equitable development for a historic tract of land in the heart of fast-growing Pittsburgh. The establishment of a city-wide affordable housing task force, and the largest tax financing district in the history of the City of Pittsburgh were sealed as a part of the negotiations.

Milliones' policy advocacy over the years has resulted in a more equitable approach to development throughout the City. She has designed processes that assure that marginalized communities can be self-determinative in real estate development including community-level review and approval of projects requiring public subsidy. Her organization has pipelined and is preparing over 400 renters for homeownership; and recently launched a residential and commercial community land trust. Most notable is Milliones' work towards building a Black cultural and commercial neighborhood district anchored by the restoration of the historic New Granada Theater, new office space and storefronts, and 40 units of artist-preference affordable housing. The $55M+ mixed-use development effort will be an iconic example of how culture is a surefire economic development tool.

Milliones has received numerous recognitions and has served on numerous boards including the transition team for Pennsylvania Governor Tom Wolf's Department of Community and Economic Development. A graduate of North Carolina Agricultural and Technical State University with a Bachelor of Science in Education, and a Master of Science from Duquesne University in Multimedia (Interactive) Technology, she is a passionate communicator who utilizes her educational background to deepen conversations and dismantle complex concepts for everyday people, especially Hill District residents. She is a member of Leadership Pittsburgh Class XXXI and LeadNow Pgh II. Milliones is a Gallup Certified Strengths Coach and brings a strengths-based approach to organizational and community development. She has been recognized by the New Pittsburgh Courier, YMCA, Onyx Woman, Talk Magazine and others. In 2015, she was recognized by Pittsburgh Magazine as one of Pittsburgh's 15 Future Powerbrokers. She was recently listed in Pittsburgh Business Times' 2020 List of the Top 20 people to know in Construction in the Pittsburgh Region.

Return To Board & Staff